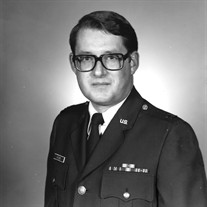 Col. Aubin Michael Higgins, USAF (ret.), PhD, PE ALEXANDRIA, Va. - Aubin Michael Higgins was born on May 23, 1943 in Earlington, Kentucky, and passed away peacefully at his home in Alexandria, Virginia on September 23, 2021, at age 78. He was the son of Aubin and Thelma Hibbs Higgins, both of Earlington, Kentucky. Dr. Higgins was a 1965 graduate of the University of Kentucky in Lexington, with a BS in mechanical engineering. He went on to obtain an MS in 1967, and a PhD in biomechanical engineering in 1971, and served on the alumni board for the UK College of Engineering from 2005 to 2015. He was commissioned as an officer in the US Air Force in 1965, serving as a professional engineer, and retired from the Pentagon with the rank of Colonel in 1996. During his service, Dr. Higgins taught engineering at the United States Air Force Academy from 1978 to 1983. He also worked in the Air Force Flight Dynamics Laboratory, and led the CREST program to design ejection seats for the F-16 and other aircraft, saving the lives of numerous pilots. Dr. Higgins was preceded in death by his wife Theresa Davis Higgins of Earlington, Kentucky, in November 2000, from complications from multiple sclerosis. He is survived by his daughter Amy Higgins, her husband Mike Simpson, and their sons Gabriel and Nolan Simpson of Atlanta, Georgia; and his brother Lexis Higgins, his wife Vicky, and their children Nathan, Benjamin and Abby, of Fort Garland, Colorado. A memorial service will be held at Jefferson Funeral Chapel in Kingstowne, Virginia on Thursday, January 13, 2022 @ 8:45AM followed by burial will at Arlington National Cemetery at 11AM. In lieu of flowers, donations may be made to the National Multiple Sclerosis Society at http://www.nationalmssociety.org

Col. Aubin Michael Higgins, USAF (ret.), PhD, PE ALEXANDRIA, Va. - Aubin Michael Higgins was born on May 23, 1943 in Earlington, Kentucky, and passed away peacefully at his home in Alexandria, Virginia on September 23, 2021, at age 78. He was... View Obituary & Service Information

The family of Colonel Aubin Michael Higgins created this Life Tributes page to make it easy to share your memories.

Send flowers to the Higgins family.