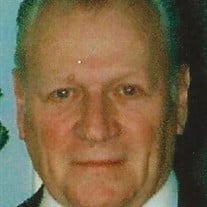 Arthur Francis Boland of Alexandria, Virginia, passed away at the age of 90 on June 22, 2020. Born July 3, 1929, in Brooklyn, New York, he was the son of the late Arthur Francis and Blanche (Hayes) Boland. Arthur is survived by his wife Mary of 68 years, daughters: Annamarie (Rick) Mays, Susan (Mike) King, Brigitte (Jack) Ferrick, and Ginger (Dale) Robertson. Grandchildren include Nicole (Joe), Shane, Kyle (Jenni), Megan (Will), Jack (Sarah), Ethan (Katie), Travis (Rachel), Lauren, Tara (Josh), Eddie (Denisse) and Brett. Great grandchildren are Luke, Zack, Lindsey, Isabel, John, McKinlee, Leah, Riley, Logan and preceded in death, Madison. Arthur was a loving-caring husband, father, grandfather, great-grandfather and friend to everyone. Arthur joined the Marine Corps in 1951, where he attended flight school and worked in radar construction during the Korean War. He was the recipient of the National Defense Service Medal. He retired as a Colonel. After the Marine Corps, Arthur went on to work at the CIA as an Electrical Engineer. He was a certified Real Estate Appraiser and joined the Marine Reserves. He married Mary Keck on January 19, 1952 at St. Louis Church in Alexandria. During his time as a Marine, Art and Mary traveled the country as he was stationed in a variety of locations including Pensacola, Florida and Camp LeJeune, North Carolina. Once settled in Alexandria, Virginia, Art and Mary raised their four daughters and were very active in their schooling and sporting events. He spent numerous hours at Virginia Hills Pool being a timer at swim meets for his girls. As grandparents, they would spend their time driving around the state watching their grandchildren play a variety of little league, high school and collegiate sports. In later years, Arthur continued his love of sports by watching collegiate and professional games on television and he especially enjoyed watching the Nationals win the World Series. Arthur was an intelligent, caring, fantastic individual with an amazing smile and laugh. He will be greatly missed by all that knew him. In lieu of flowers, memorial donations may be made to the Marine Corps Heritage Foundation, 18900 Jefferson Davis Highway, Triangle, Virginia 22172 or online at www.marineheritage.org.

Arthur Francis Boland of Alexandria, Virginia, passed away at the age of 90 on June 22, 2020. Born July 3, 1929, in Brooklyn, New York, he was the son of the late Arthur Francis and Blanche (Hayes) Boland. Arthur is survived by his wife Mary... View Obituary & Service Information

The family of Arthur F. Boland created this Life Tributes page to make it easy to share your memories.

Arthur Francis Boland of Alexandria, Virginia, passed away at...

Send flowers to the Boland family.