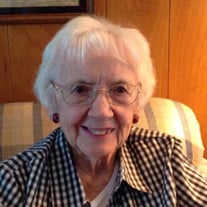 Ann Catherine Hanley (nee Herron) On September 26, 2021, Ann, age 94, widow of the late John “Jack” R. Hanley, quietly passed away at her home near Mount Vernon, VA, with her loving family near her bedside. Ann was born in Tamaqua, PA on June 24, 1927, the daughter of Lawrence Joseph and Catherine Marie (Reber) Herron. She also resided in Milton, PA. In her youth, Ann took ballet and tap dancing classes and appeared in several performances in local theatres. Ann graduated as salutatorian from St. Jeromes's High School in Tamaqua in 1945. She also attended some high schooling in Milton, PA. Following graduation, she was employed at Indiantown Military Reservation (IGMR), which housed German POW's and served as a separation center for discharging WWII soldiers. After IGMR closed and she received a Top Secret clearance, she was employed as a secretary in the Chief of Dissemination Branch, G-2, Intelligence, Department of the Army at the Pentagon. While employed there, Ann resided with other "government girls" in La Hall at Arlington Farms, now a part of Arlington Cemetery. It was here that she met her future husband Jack, a veteran of the Army Air Force during WWII, who was about to attend the University of Virginia on the GI Bill. After a 5 1/2 year courtship while Jack attended college and law school, Ann and Jack were married in Arlington, VA on Oct 18, 1952. They resided in “Bucknell Heights” in the Groveton area of Fairfax County, where she was editor of their community newspaper "The Highlander," and started a family with three sons. In 1961, they moved to the new “Riverside Estates” subdivision near Mt. Vernon, where Ann resided for the next sixty years. She was likely the longest continuous resident of Riverside. Ann was a member of the Mount Vernon Antique Arts Association and a charter member of the Mount Vernon Genealogical Society (MVGS). An avid genealogist and prolific writer, she lectured at genealogy clubs, and compiled several family history books. Ann established the MVGS library at the Hollin Hall Senior Center, and served as their librarian for several years. Ann also wrote articles for the MVGS newsletter and created many themed window displays at the Senior Center and at local libraries that promoted genealogy and antique collections. She was active with the Tamaqua Historical Society, and had an active interest in the “Molly Maguire” events in Schuylkill County, PA, and gave lectures about them at commemorative events. Ann was a patron of Mt. Vernon for many years, and donated to many charities. Her calendar was filled with the birthdays of family members, both immediate and extended, as well as her many friends, to whom she always remembered by mailing a birthday card. Ann is survived by her three sons, John (Huong) of Fairfax Station, VA, Mark (Andrea) of Alpharetta, GA, and Matthew (Joanne) of Ligonier, PA; her brother, Bernard Herron, of Dallas, TX; five grandchildren, Greg, Brett, Johnny, Annie and Carolyn; and five great-grandchildren. She was preceded in death by her parents; Jack, her husband of 55 years, and her brother, Francis Herron, of Mechanicsburg, PA. Ann will be interred beside her husband and mother in a private service at Mount Comfort Cemetery, Alexandria VA. In lieu of flowers, the family requests that donations be made in her name to her hospice Capital Caring Health at https://www.capitalcaring.org/ .

Ann Catherine Hanley (nee Herron) On September 26, 2021, Ann, age 94, widow of the late John &#8220;Jack&#8221; R. Hanley, quietly passed away at her home near Mount Vernon, VA, with her loving family near her bedside. Ann was born in Tamaqua,... View Obituary & Service Information

The family of Ann Catherine Hanley created this Life Tributes page to make it easy to share your memories.