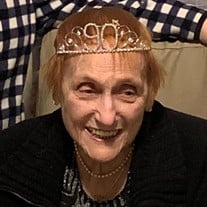 Anita Irene Carmen Fernandez Bouse, 91, formerly of Richland, Washington, died on Friday, September 11, 2020, at Inova Mount Vernon Hospital in Alexandria, Virginia. Anita Irene Fernandez was born in Philadelphia, Pennsylvania, on April 9, 1929 to Manuel Anthony Fernandez and Hedwig (Swiderski) Fernandez. Her family moved to New York City when she was very young and she was raised there, together with her brother Larry. As a young woman Anita worked at an orphanage while attending college part-time at Hunter College. Though she did not complete her degree, she also studied at Baylor University, in Waco, Texas. There she met her beloved husband Dave, who was in training at James Connally AFB, and they were married in Delaware in 1957. With Dave, Anita started a family, with son David L. Anthony Bouse born in New York in 1958, and daughter Aldebaran Darcy Bouse born in the Philippines in 1960. She accompanied Dave throughout his Air Force career, traveling to Long Island, New York; Duluth, Minnesota; the Philippines; Dover, Delaware; Wallingford, Pennsylvania; and Bedford, Massachusetts. They were apart only for the one year she could not accompany him, when he did a tour in Vietnam. Following his retirement from the Air Force, Dave and Anita moved to the Tri-Cities area of Washington where Dave started a second career as a nuclear safeguards manager at the Hanford Site before retiring a second time. When Dave passed away in September, 2016, just shy of their 59th wedding anniversary, Anita moved east into Sunrise at Mount Vernon Assisted Living in Alexandria, Virginia to be closer to family. Although Anita prepared good meals for her family until her husband retired, if you asked her she would tell you she hated to cook—but she enjoyed food; from steak to lobster and from Mexican to Chinese she would gladly accompany you to a restaurant of your choosing, and rarely allowed you to pay. She was an avid bridge player, and even when her memory was failing and she couldn’t tell you what she had had for lunch an hour ago, she could take on a novice partner and beat two fairly experienced opponents. She enjoyed games of all sorts, including games of chance, and loved going to a casino to play the slot machines whenever someone would agree to take her. She was a responsible gambler, seeing the activity as entertainment and never losing more that she could afford. Anita also enjoyed traveling, whether it was driving, flying, or cruising, going to see friends and family, or going to see famous places. She created memories with so many by either traveling with them or traveling to visit them. Anita was a beloved wife, mother, grandmother, and great-grandmother. In those roles she always believed the very best of each and every family member. Sometimes her high opinion of people was intimidating because it made them feel they could never live up to it, but mostly it was encouraging and made people want to be as good as she already thought they were. She was encouraging to those around her in so many ways. Any time you thought you failed at something, she knew you would do better next time. If you were struggling with something, things were going to get better. Even in the days of COVID, Anita was an eternal optimist, often remarking that she hoped this would be over soon. Unfortunately she did not live to see that day. Anita is survived by her son, David L. Anthony Bouse and his wife Vickie Rose (Flippo) Bouse; her daughter, Aldebaran Bouse Enloe and her husband Carl Lon Enloe; grandchildren, Dawn Marie Bouse-Beasley and her husband Jason Beasley, David Layman Bouse II and his wife Sherainne Keane-Bouse, Caroline Joy Enloe, and Thomas Lincoln Enloe and his wife Stephanie Victoria (Higgins) Enloe; and great-grandchildren, Margaret Rose Beasley, Gracelyn Marie Beasley, Marley Keane-Bouse, David Layman Bouse III ("Trey"), and Samantha Faye Beasley. Anita was predeceased by her husband, David Layman Bouse, and by her brother Manuel Lawrence Fernandez (“Larry”). Her beloved pet dog, Ladybird, also predeceased her. Services for Anita and her husband Dave will be held at a later date, when they will be put to rest together in Arlington National Cemetery. Her family will miss her generosity, optimism, and encouragement. Though not much of a sports fan, Anita would have found truth in these words: “All kids need is a little help, a little hope and somebody who believes in them.” – Magic Johnson In remembrance of Anita Bouse the family asks that any charitable donations be made to INOVA Mount Vernon Hospital.

The family of Anita Fernandez Bouse created this Life Tributes page to make it easy to share your memories.