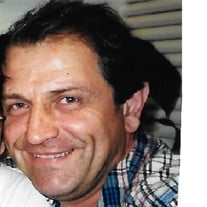 The world lost a good man when Alija Dedajic died suddenly on Oct 8, 2020 at home in Alexandria, Va., with his beloved Shepherd, Rocky, at his side. He was 65 and had heart disease. Born on Aug. 10, 1955 in Sarajevo, Yugoslavia, Alija had a magnetic personality, and beneath his tough exterior resided a deeply generous soul. Something of a rogue, he was dubbed “Wolf” by the legendary tabloid reporter Steve Dunleavy, a longtime friend and fellow rogue. The nickname stuck. A political dissident in his youth, Alija left school to make his own way in the world. Ever after, Alija always did things his own way. One of his greatest achievements was keeping his family safe from the shelling, snipers and hunger that killed more than 5,000 civilians during the 2 1/2 -year siege of Sarajevo in the brutal war in Bosnia. He fought to protect his neighborhood, and rescued strangers shot by Serb snipers from the hills above. Alija organized a combat resistance unit of 30 fighters, and served in the military police. Throughout the war, Alija also served as a bodyguard, translator, and guide for visiting U.S. congressmen, doctors, humanitarian workers business persons and war correspondents for the New York Times, the Los Angeles Times, Time Magazine and others. After Alija emigrated to the US in 1995, he was a limo driver for some of the top newsmakers in Washington at the time, including presidential candidates and congressmen. He became friends with many of them, including Sean Hannity, Chris Matthews and Energy Secretary Bill Richardson. Later, he used his natural gift as a salesman at several Mercedes Benz dealerships, where he was a top performer each month. Then he went on to build his own successful car sales businesses, Wolf Limo and Wolf Autos. Alija’s greatest legacy, and source of his deepest pride and love, were his two children, Mirza Dedajic and Aida Dedajic. Alija is also survived by his wife of 23 years, Lisa Hoffman; his former wife, Alma Dedajic; daughter-in-law Melissa Dedajic; son-in-law Carlos Ramirez; infant grandson Dylan Dedajic; and father-in-law Fred Hoffman. A memorial gathering will be held at a later date. May Alija/Wolf rest in peace. And may his memory be a blessing.

The world lost a good man when Alija Dedajic died suddenly on Oct 8, 2020 at home in Alexandria, Va., with his beloved Shepherd, Rocky, at his side. He was 65 and had heart disease. Born on Aug. 10, 1955 in Sarajevo, Yugoslavia, Alija had... View Obituary & Service Information

The family of Alija Dedajic created this Life Tributes page to make it easy to share your memories.

The world lost a good man when Alija Dedajic died suddenly on...