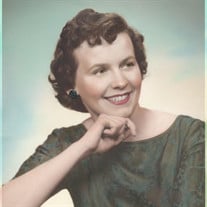 Alice Winifred O’Connor 1925-2020 Alice Winifred O’Connor, of Alexandria, Virginia passed away peacefully on November 19, 2020 in hospice care in San Diego, California. A beloved mother, grandmother, devoted wife and dear friend to so many, she lived a beautiful and blessed life of 95 years. Alice was born in New York City on January 23, 1925, the daughter of Francis Michael O’Laughlin and Maude Mary (Lally) O’Laughlin. She spent her early years in Hempstead, New York, graduating from Hempstead High School in 1943 and worked in a dressmaker shop immediately following graduation. She and her family moved to White Plains, New York in 1944 and Alice worked for the next 6 years in downtown New York City as a stenographer, phone operator, secretary and logistics assistant in a number of wartime and post-war businesses. In 1948 she met and fell in love with a young Naval Officer, Thomas J. O’Connor, stationed in Bayonne, New Jersey and following a lengthy Pacific sea duty tour for him they reunited and married in 1950 in New York. Alice spent the next 68 years alongside the love of her life as a Navy wife, mother to nine children, grandmother, great-grandmother and actress. As a military spouse for 25 years she served admirably, supporting her husband’s active duty career and raised a large family while experiencing the numerous challenges of multiple commands, Navy family groups and duty stations throughout the country including Annapolis (MD), San Juan (PR), Boston (MA), Philadelphia (PA), Long Beach (CA), Palo Alto (CA), Great Lakes (IL) and Alexandria (VA). When husband Tom retired from active duty in 1974, they decided to stay put and grow lasting roots in Alexandria, Virginia. Alice was an original homeowner in the Hayfield Farm community of Alexandria, VA in 1965 and lived there for over 50 years. She was very active in the early establishment of its Hayfield Citizens Association and Garden Club and early schools. As her children grew older, she embarked on her own second career as a part-time actress, modeling in various commercial and television advertisements, making industrial and government training films, playing small parts in feature films and television shows and promoting and acting in local theatrical productions. She joined SAG/AFTRA and a local casting agency for Washington D.C. extras and “day-players” and had roles in feature films and television shows being filmed in the Washington D.C. and Baltimore area. Alice was a long-time member of the Little Theatre of Alexandria and served in many roles as an actress in productions, in promotional work for the Theatre and on its Board of Trustees. A devout Catholic, she was active in many parishes wherever she lived but especially in St. Lawrence Catholic Church in Alexandria, VA from its earliest days in 1972 and for the subsequent 46 years supporting its missions and activities, singing in the choir and befriending the many priests and parishioners. She always found peace and comfort with her husband in the beautiful small rose garden adjacent to that Church. Alice was the last surviving child of Francis and Maude O’Laughlin of White Plains, New York, having been pre-deceased by her parents and her two brothers, Francis M. O’Laughlin, Jr. and Alexander J. O’Laughlin. Her loving husband, CAPT Thomas J. O’Connor USN (Ret.) passed away in September 2018. Alice is survived by all of her 9 children: Carol A. Garrett; CAPT Thomas J. O’Connor, Jr. USN Ret. (Jeanne); Patrick M. O’Connor (Beth); Kathleen J. Sultze (Larry); Maryalice Walsh (Patrick); Lawrence J. O’Connor (Ashley); Diane Elder (Alan); Stephen F. O’Connor (Shirley); and Daniel J. O’Connor (Melissa) and 23 grandchildren and 6 great-grandchildren. She relocated in 2018 to the Greenspring Retirement Community in Springfield, VA and then in 2020 to assisted living care in Olney, MD and San Diego, CA. Her family is deeply grateful for the many caregivers who aided, cared and befriended her during her last two years and especially during the isolation of the 2020 pandemic. Alice lived a long and beautiful life of warmth and loves for her husband, her children, her grandchildren and her many friends. She was a talker, a grand hostess, a friend to many, a master organizer and was totally absorbed in her wonderfully large family’s academic, social, athletic and professional growth. She loved vacations at the beach, Naval Academy football game tailgates, garden upkeep, matchmaking, good books to read, theater productions, dancing, travel and boisterous bridge card games with her friends. But mostly she lived large for her husband and children and their children. She will be remembered fondly through endless memories of events over a life well-lived for her loving nature, warm friendship, joy and kindness, faith and devotion to family. But mostly for the loving parent and devoted mother and grandmother that she truly was. A celebration of her beautiful life will be held at a later date in 2021 when she will be buried alongside her loving husband at Arlington National Cemetery in Arlington, Virginia.

The family of Alice Winifred O'Connor created this Life Tributes page to make it easy to share your memories.

Send flowers to the O'Connor family.