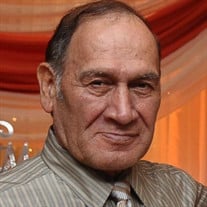 Alejandro Talavera (born Melecio Alejandro Talavera) passed away peacefully in his sleep on the evening of August 12, 2021. He was born in Puno, Peru, in 1937. He was the second of six children and moved to Arequipa during his childhood. He worked in a milk factory and as a shoemaker in his years in Peru. In 1970 he moved to the U.S. to settle in Silver Spring, Maryland, near family that had immigrated here and began working in an auto body shop alongside two of his brothers. In 1983 he was able to bring his son Alex to live with him, and over the coming years the majority of his children and their mother were able to immigrate to the U.S. as well. Melecio (as his family called him) loved working on cars, and buying a home with a detached garage eventually allowed him to do side jobs and help out family and friends when they needed minor repairs on their cars. Melecio enjoyed watching his family grow as his seven children had children of their own. He loved Peru and overcame his fear of flying to visit his oldest daughter Mary there for many years, often celebrating his birthday there. He loved to dance to all kinds of Latin music and never outgrew his love of a good party and a beer. He continued working well into his 70s and after his retirement enjoyed spending time at the local senior center with many new friends. After a fall at home in 2019, he moved to Virginia to be near his children. His last months were challenging as he coped with the effects of advanced Parkinson's, but the entire family was able to be by his side to care for him throughout this time. He enjoyed his favorite Peruvian dishes cooked by his daughters until the very end, and loved having visits from his grandchildren and great-grandchildren, especially the little ones who climbed on his bed to give him kisses. He is survived by his seven children, Marta Talavera, Mary Olivera (Jorge), Amparo Velazco (Percy), Emilia Goncalves (Antonio), Haydee Pellanne (Arturo), Milagro Guzman (Paul), and Alejandro Talavera (Theresa), twenty-three grandchildren, and five great-grandchildren. Viewing will be held at St. Louis Catholic Church in Alexandria from 12-1 pm on Tuesday, August 17, followed by a Mass of Christian burial at 1 pm.

Alejandro Talavera (born Melecio Alejandro Talavera) passed away peacefully in his sleep on the evening of August 12, 2021. He was born in Puno, Peru, in 1937. He was the second of six children and moved to Arequipa during his childhood. He... View Obituary & Service Information

The family of Alejandro Talavera created this Life Tributes page to make it easy to share your memories.

Send flowers to the Talavera family.