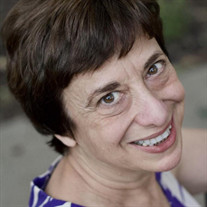 Adrienne Jackel Gibson passed away at home on June 25, 2021 at age 73. The younger of two daughters born to Julius and Dorothy Jackel, Adrienne was raised in Queens and the Bronx, where she enjoyed a close relationship with her sister, aunts, uncles and cousins who lived nearby. Adrienne received her undergraduate degree at Harpur College (now Binghamton University) and her master’s degree in childhood education at the University of Connecticut. Afterwards, Adrienne taught elementary school in Connecticut, before moving to New York City, where she taught elementary school and held a number of other jobs. Adrienne met her husband, Stuart, in 1980 on a single’s tour of Israel. While they quickly formed a friendship, it took a few months before their relationship turned romantic. The couple married on November 8, 1981 and were inseparable for nearly 40 years, enjoying live theater and taking long walks around Reston, where they raised their two daughters. But most of all, Adrienne enjoyed traveling with Stuart. They visited Italy, Peru, Portugal, the Galapagos, South Africa, Hawaii, Iceland and Switzerland, among other places. While Adrienne loved being a full-time mom, she was also an artist, an educator, a peacemaker and an emotional lighthouse for lost souls. She created a feeling of home for everyone who entered her house; people felt seen and safe with her. Adrienne is survived and will be missed by her husband, Stuart Gibson, sister Rhoda Lynch, daughters Rebecca Gibson and Elyse Gibson Ash, as well as her son-in-law Brad Ash and granddaughter Abigail Ash. May her memory be a blessing to every life she touched. A funeral honoring the life of Adrienne Gibson will be held on Tuesday, June 29, 2021 at 10:30 am at Temple Rodef Shalom, 2100 Westmoreland St., Falls Church, Virginia, followed by interment at King David Memorial Garden in Falls Church. In lieu of flowers, please consider making a charitable donation in Adrienne's memory to an organization she supported: the ALS Clinic at Johns Hopkins, MAZON or World Central Kitchen. For those who are unable to attend in person, the funeral will be live-streamed (https://www.templerodefshalom.org/live/)

Adrienne Jackel Gibson passed away at home on June 25, 2021 at age 73. The younger of two daughters born to Julius and Dorothy Jackel, Adrienne was raised in Queens and the Bronx, where she enjoyed a close relationship with her sister, aunts,... View Obituary & Service Information

The family of Adrienne Jackel Gibson created this Life Tributes page to make it easy to share your memories.