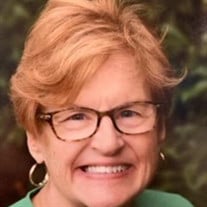 Adeline Louise “Nina” Donohue-McDonald of Alexandria, VA died, quite honestly, unexpectedly, on Friday, October 2nd surrounded by her family. Born in Holyoke, MA, she was the daughter of Michael and Adeline (O’Neil) Donohue. A graduate of Holyoke Catholic High and Salve Regina University, Nina began her career as her Alma Mater’s Director of Student Activities. In that role she perfected the art of party planning, establishing that food is not an afterthought and there are 165 cups of beer in a ½ keg. For this, and her staunch support in the importance of education for women, she was honored in 2011 with the Annual Alumni Achievement Award. From there she moved to Boston’s North End. She discovered the neighborhood past time of “leaning out” her 4th floor window during the summer weekly saints parades. She began working for SMH Bar Review, quickly rising to serve as Vice President of Operations. On a trip to Bermuda, Nina met her first husband David Walpole from England. The Irish/English relationship improved greatly because of their strong bond. His sudden death gave her the impetus to move to Washington, DC where she joined both her sisters. Soon thereafter she met Tom McDonald at his 40th birthday party at The Four Seasons. Within weeks, and after a whirlwind romance, the deal was sealed at Holyoke’s Nick’s Nest Hotdog Stand. (With encouragement from niece Bligh who secretly wanted to be a flower girl and wear the Nordstrom red shoes!) They were married less than a year later in May of 1993. The arrival of her sons, Declan and Griffin both surprised and delighted her (most of the time!) Her desire for motherhood was cemented, and she ‘retired’ from the corporate world to focus on the boys and their constantly growing circle of friends. Nina & Tom’s home was the spot to find a listening ear, unlimited love, and most importantly, a full refrigerator. Nina was recognized as a second-mother, firm guiding light, and teacher of the rules of civility to all within her circle. Nina shared her love of large parties by opening their home to the neighborhood cul-de-sac at the Cinco de Mayo, 4th of July, and the “I just dropped my kids off for the First Day of School” parties that brought parents of all ages together. She was also well known for her sage and occasionally unwarranted advice, including “never complain about your spouse because it makes your judgement look bad” or “don’t let the truth get in the way of a good story.” Nina was exceptional at keeping us all on track and she often imparted advice without us ever realizing. Finally, Nina was known more for not actually cooking, but for “assembling” delicious 5-ingredient dinners. Her table was always impeccably set and she instilled within us the knowledge that serving dishes would be cleared first upon the completion of the meal and of course, one never stacks the dishes. The McDonald family would like to thank Nina’s Oncologist, Dr. Dipti Patel-Donnelly, along with the entire Virginia Cancer Specialists’ Team, and the Doctors, Nurses and Staff at Inova Fairfax Hospital for their excellent care and kindness over the past 13 years. She is survived by her loving husband, Tom, two “better-than-average” sons, Declan of Arlington and Griffin of Alexandria; her siblings and their spouses:, Michael and Nancy, Owen, Carey and Charlie, Quentin and Debbie, and Maria and Craig and brother-in-law Kevin; “her favorite nieces and nephews”, dozens of cousins and so many close friends who to name them all the newspaper would run out of ink. The Jefferson Funeral Chapel at 5755 Castlewellan Drive in Alexandria, Virginia is in charge of the funeral arrangements. An Irish Wake will be held on Friday, October 9th from 3-5 and 7-9PM; the funeral service will be held on Saturday, October 10th at 10:30 AM. In light of the recent worldwide occurrences dealing with the outbreak of COVID-19, the family would like to have Nina's Funeral Service reserved for immediate family. The service will be livestreamed at jefferesonfuneralchapel.com for those who can’t attend. Burial will be in the Agawam Massachusetts Veteran’s Cemetery at a later date. In lieu of flowers, the family asks that you donate to her nephew Will Burke’s favorite charity willpowerfoundation.org. Nina’s final request is that you vote for Joe Biden on November 3, 2020. She, RBG and Helen Reddy will be watching!

The family of Adeline "Nina" Donohue-McDonald created this Life Tributes page to make it easy to share your memories.

Send flowers to the Donohue-McDonald family.